Tiwi Street names are largely taken from the names of pastoral properties (stations) in the Northern Territory. 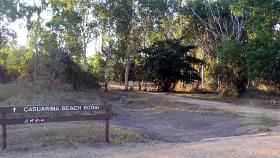 Dripstone Middle School is the prominent feature of this residential suburb located between the hospital, Trower Rd. and the Casuarina Beach.
In 1974 when Cyclone Tracy destroyed much of Darwin this was one of the new suburban areas being developed as the city grew.

The Casuarina Coastal Reserve can be accessed by road and walking tracks from Rocklands Drive and the Hospital area and is a popular recreation area for Darwin people.

The name Tiwi comes from the word Tunuvivi which was the original name of the Aboriginal people of Melville and Bathurst Island.