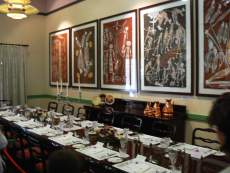 The contribution of aboriginal artists to the Northern Territory is acknowledged by this proud display of their work in the formal dining room at Government House.

Aboriginal Artists in the Northern Territory

Australian Indigenous art is the oldest ongoing tradition of art in the world. Rock carvings and paintings have been dated more than 30,000 years.

Art has always been an important part of Aboriginal life, connecting past and present, the people and the land, and the supernatural and the natural.

There are many places where you can view original aboriginal art, including the Darwin Museum, the Darwin Library, several commercial art galleries and any of the local markets. 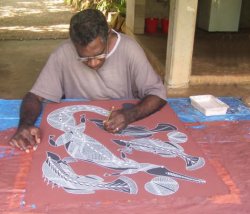 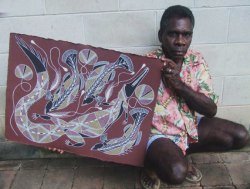 Leslie paints in the traditional way of his people, known as Kunwinjku people who come from the Liverpool River and Mann River regions of Western Arnhem Land in the Northern Territory of Australia.

His subjects are local creatures (birds, animals, fish and earth spirits) which inhabit the freshwater billabongs and escarpment of that country.

The paintings are famous for their "x-ray" style. Leslie has perfected the technique of cross-hatching (called rarrk). He uses the bristles found inside the stem of a reed to paint these fine lines.

Leslie's work is an excellent exhibition of the Kunwinjku Art tradition. 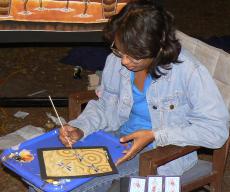 Natasha uses a modern medium of acrylic paints on canvass to share the bush tucker and culture stories of her ancestor's, the Nyul Nyul, Yawuru, Jabirr Jabirr and Yamatji tribes of Western Australia. 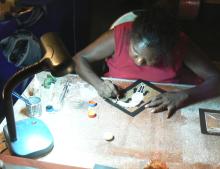 Rhonda has developed her own style of painting from watching her uncles and grandfathers paint during her early years in Bulman, a Central Arnhemland community, and also influenced by the styles of Oenpelli and Jabiru.

As head of her family, she has gone back to studying the cultural background of her Marlirri clan and the Emu Dreaming which stretches from Koiobidadah in North-East Arnhemland to Mt Catt.

Aboriganal art and history of the Kamor people of Daly River