Adelaide River is a small town on the Stuart Highway in the Northern Territory. It is probably best known for the War Cemetery on the banks of the river, and the popular annual Racing Carnival. 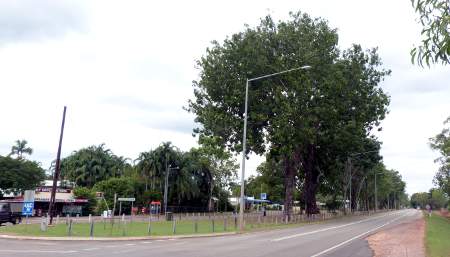 The River itself is possibly better known for the jumping crocodiles which attract many tourists to where the Arnehm Highway crosses the tidal section of the river much further downstream.

However town itself is further upstream and is the location of the War Cemetery, the .303 bar at the Adelaide River Inn and the Railway Precinct Museum.

The Inn is located behind the BP Service Station with lots of shade , green lawns and some famous residents including Charlie the buffalo from Crocodile Dundee. The annual Rosella Festival is held on the lawns here. 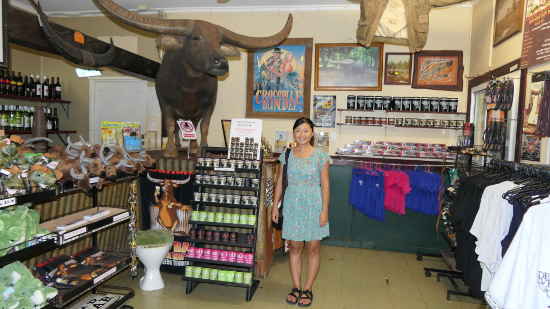 A photo with Charlie, buffalo star of the movie Crocodile Dundee 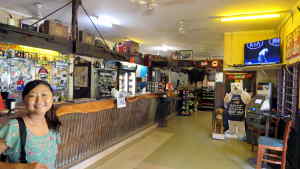 The .303 bar is guarded outside the door by Jock the Croc, a 5m crocodile from Borroloola, while inside Charlie the buffalo watches over patrons.

Midday and evening meals are available from the restaurant outside the bar. 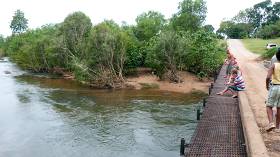 Fishing from the old low level bridge in April while there is still a good flow in the river.

During the dry season this flow dries to a trickle of water and small rocky pools.

During the wet season, monsoonal rains can transform this river in hours, covering the bridge, and in times past cutting Darwin off from supplies for extended periods. 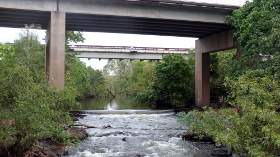 Looking upstream from the old bridge gives a sense of how high the river can rise.

The bridge in the foreground was opened in 1980 to provide all weather road access for the Stuart Highway.

In the background the rusty steel girders of the original railway bridge protrude above the new concrete structure built to carry the new Adelaide to Darwin railway. 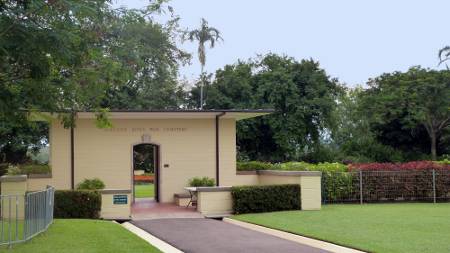 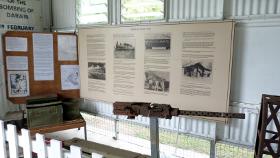 Many of the people killed in the bombing of Darwin and other actions during the War are buried in this Commonwealth War Graves Cemetery.

A display at the original Railway Station exhibits the history of the telegraph line, railway history and war memorabilia.

The original railway played an important part of the history of the area from when the bridge over the river was opened in 1888 until it was decommissioned in 1967. 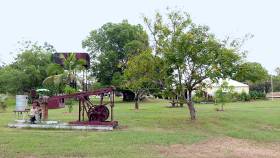 Local enthusiasts have helped restore items from the original telegraph line, the railway and the war, helping to keep this history alive.

It is well worth making the time to spend a couple of hours here at least.

This photo shows the original station, the water tower and one of the water pumps used to bring water from a local reservoir for the steam trains. 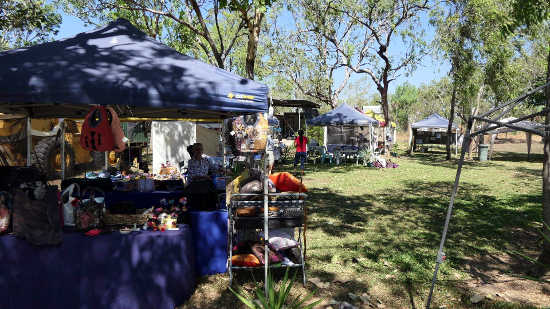 A small craft market operates beside the Historic Railway  site during the dry season.

Open every day from 8am to 1pm it's a good opportunity to meet some locals over a friendly cupppa.

Let the world know everything about Adelaide River

Return from Adelaide River to Roads to Darwin
Return to Enjoy Darwin Home.