Aboriginal art, history and culture of the Kamor people from the Daly River region in the Northern Territory.

Arthur is an elder of the Kamor Tribe who are traditional owners of the Daly River region.

His legacy will live on through his children and grandchildren.

This is the story about the massacre of the Kamu, known as the Woolwongas, at the copper mine at Daly River in 1884.

At that time the leader and protector of the Kamu people was our ancestor known as Nami. The story begins when a white settler shot and killed a member of the Kamor tribe. In retaliation, Nami killed the white man. He speared the white man called Noltenious who was later buried at the billabong known today as Noltenious Billabong.

That caused the white settlement to retaliate against the Kamor Tribe. They sought to kill all the natives within the copper mine. They murdered, poisoned, and to save bullets on babies, they bashed their heads on rocks.

This is the story told to Arthur by his grandmother before she passed away. The painting represents all of Arthur's ancestors.

This is Arthur's Story 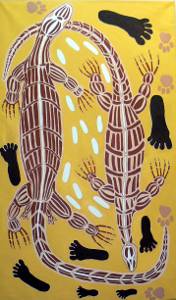 When cane toads arrived they wiped out nearly all the goannas, which were the main food of the Kamor people.

The Kamor peope were also said to be extinct, but we are not extinct but growing in numbers, and are now 5 generations strong since they first said we were extinct.

Now the goanna is nearly extinct, but we hope they grow in numbers as we have.

The paintings are to tell our story about our country and the animals that represent our dreaming and places. They also tell the story of our people's struggles since the arrival of Europeans in the Daly area.

Old people used to look for turtle on the side of the billabong. There are many turtles in the Daly River. Turtles are the main tucker for the Kamor people, as they used to hunt them by poking sticks in the swamp grass out in the open and in the dry mud.

When they pulled the turtle out of the mud they would see the snake sitting in the water waiting for the turtle to return.

Goanna painting depicts a family of a man and woman with a child and a dingo hunting the male and female goanna and their eggs. The goanna is a traditional food for the Kamor people and are in danger of becoming extinct since cane toads have invaded the area.

The Dreamtime story of the Snake and Turtle 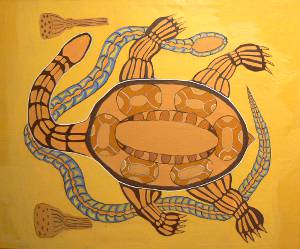 The Snake and the Turtle

The snake and the turtle live in the billabongs.

The snake provides for the turtle by crushing food for the snake and in return the turtle carries the snake on it's back through the water.

Old people used to look for turtle on the side of the billabong. There are many turtles in the Daly River and they are the main tucker for the Kamor people. They were hunted by pushing sticks in the swamp grass out in the open and in the dry mud. 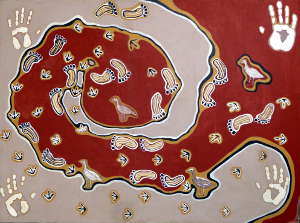 In the dreamtime the curlew was an aboriginal woman who lost her child and then was reincarnated as a curlew and now you can still hear her cries in the night as she searches for her baby.

The painting shows the hand of mothers who use leaves to cover the tracks their babies leave in the sand around the camps so the curlew does not find them while searching for her own baby. 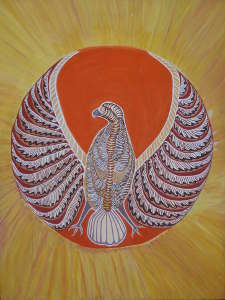 The chickenhawk flies around in the sky looking for grass fires in the dry season. And there's the dingo with cheeky yam, he goes and rubs two sticks together to make fire but to no avail. The dingo gets hungry and eats the cheeky yam.

And today all of the dogs have black paws and dribble from the mouth. 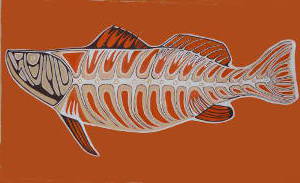 Daly River town in the Northern Territory is 230km south of Darwin, by the river crossing and centered on the Aboriginal Community of Naulyu, originally the site of a Catholic Mission.

The Traditional Aboriginal owners of the area are the Malak Malak people who live both in Naulyu and at Woolianna, further downstream. Many indigenous people began living in the area when first settled by Europeans, with Ngan'gikuruggurr being the most prominent of the ten local languages.

The area is popular for recreational fishing for Barrumundi 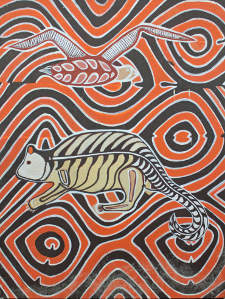 Nightbird and possum were good friends who go hunting at night for food. They go to look for food inside hollow logs. But possum was always cheeky, he would always hit Nightbird with a stick.

Until one night when Nightbird couldn't stand it any more he asked Possum, "Why do you always hit me with a stick?" 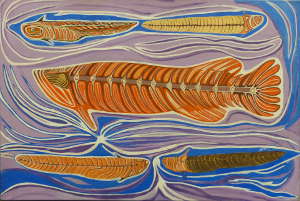 Saratoga is also known as half barramundi by indigenous people.

Long ago in the dreamtime there were no fish so the people lived on animals, roots and berries. They were all quite content, that is except Boodi and Yalima for they wanted to marry. But the tribe insisted that Yalima marry one of the old men to look after him. Boodi and Yalima decided to run away, and so they did. Now to go against the elders of the tribe is breaking the law, and is punishable by death. So soon the men of the tribe began hunting them.

They ran on and on and although they became very tired, they had to keep running. Eventually they came to the edge of the land where the water began and they knew that to survive they would have to fight.

With the angry tribe descending on them they quickly gathered wood and made as many spears as they could. But the tribesmen were too many and soon the spears were all gone. Boodi turned to his beloved Yalima and said, "For us to be together forever we must go into the water to live." And so they did.

They are still there in the shape of the Barramundi hiding amongst the logs and reeds. 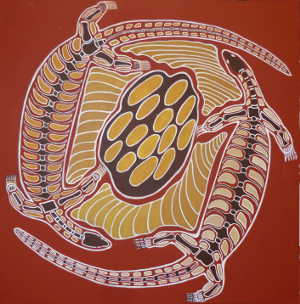 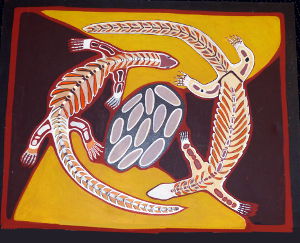