Local Darwin newspapers include the NT News, Darwin Sun, Palmerston Sun and Sunday Territorian which are all owned by News LTD. The Territory Regional Weekly is the only locally owned newspaper.

The Territory Regional Weekly publishes weekly, reporting on local stories and lifestyle issues. It is very popular in the large and growing semi-rural area in the outer Darwin region and has an increasing readership in the city and suburbs.
Shop1/15 Vereker St
Humpty Doo NT 0836
Phone: (08) 8992 2028

The NT Rural Weekly is part of the News Corp rural network which began publishing in the NT in April 2015.


The Trading Post is owned by Sensis (Yellow Pages) and was published once a week in all states. It is no longer printed. 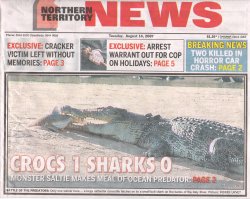 Crocodiles are often in the NT News