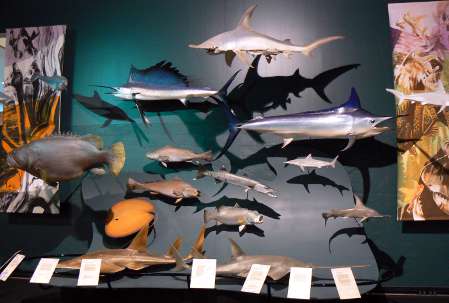 Northern Territory fish species on display at the Darwin Museum, including some rare and protected species

Barramundi is the most popular fish for recreational anglers in the NT.

The maximum number of Fish is 30 at any one time.

PROTECTED SHARK SPECIES
Sawfish
All sawfish species are protected and must be released unharmed. Sawfih are unable to survive without their rostrum (saw), and on no account should this be removed.
Northern river shark (Glyphis garricki) and
Speartooth shark (Glyphis glyphis)
Northern river shark and speartooth shark are protected and must be released unharmed. These species have been found in many Territory rivers, including the upper freshwater reaches. Both
species are similar in appearance to the common bull shark. 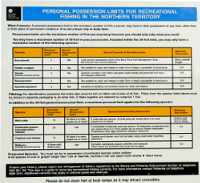 Look for a sign like this near NT boat ramps to be clear about the fishing bag limits.

Read more details online at the Department of Resources.