Esturine Crocodiles and the smaller, freshwater Johnstons crocodile are both native to Australia and found in large areas of northern Australia.

In a rare photo, the smaller freshwater croc moves away from a medium sized saltie.

The larger esturine variety are also found throughout many tropical Asian countries, however they are most abundant in Australian waters because of their status as a protected species.

More commonly called saltwater crocs or "salties", they have become an important part of local economies where they bring tourists and are farmed for their meat and skins.

Males can grow to 6 metres or more and are dangerous animals which will attack anything on or near the water.
Many people have been killed or injured by not being careful enough to keep out of their way.
Even small creeks and waterholes can be dangerous places, especially during the wet season when crocs are on the move. 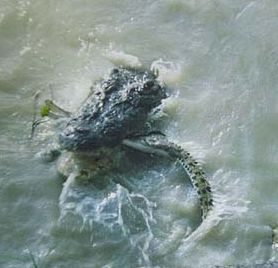 The smaller Johnston freshwater crocodile is not normally dangerous at all, living in freshwater streams and billabongs further inland than the salties. Crocs will eat anything, including their smaller brothers or cousins and are very territorial.

Fights are frequent and it is not unusual to see reptiles missing a leg or part of their tail.

Normally they will eat fish, turtles, snakes, birds, sharks and anything on or near the waters edge. Large males can easily take pigs or cattle from the river banks 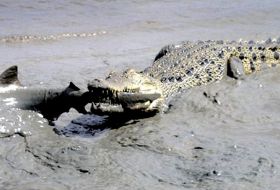 Locals joke that there's no need to worry about sharks when you go swimming - the crocs ate them all!

The message should be clear - be careful near any water in tropical Australia.
Salties are quite happy living in brackish or fresh water anywhere near the coast and will move quite long distances, so you never know where they will turn up.
During the monsoonal wet season in particular extra floods enable then to move easily.

Large crocs will also travel distances at sea, and there are recorded instances of scuba divers being attacked diving some distance from any land.

The Darwin Museum has a permanent crocodile display well worth a visit, and there are several crocodile tours in the Darwin area which allow people to safely view these ancient reptiles in their natural habitat.

Return from Crocodiles to Enjoy Darwin.