The Darwin Mangrove Ecosystem supports varieties of mangrove trees, birds and crabs and is an important fish breeding habitat. 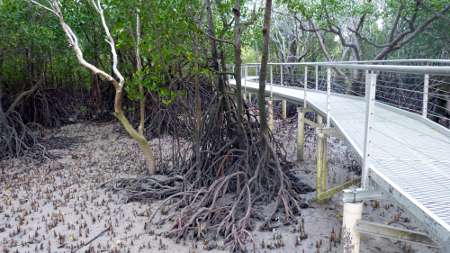 The Darwin Mangrove Ecosystem is made accessible by this walkway 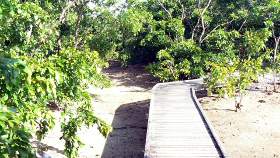 Mangroves cover a narrow band around much of the Northern Territory coastline. 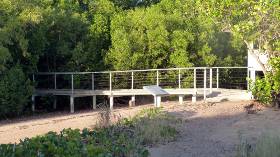 ... to the aluminium walkway into the mangroves.

The walk from Lake Alexander takes about 20 minutes, the last section along a raised metal walkway above the muddy mangrove floor.

With tides of up to 8 metres, this walk can be very different at different times. 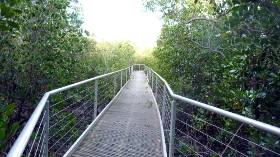 The metal walkway works its way through mangroves

A short walk along a gravel path which follows the high water beach brings you to the beginning of the metal mangrove boardwalk.

This metal bordwalk heads straight out towards the sea through the dense canopy of mangrove trees.

When the tides is high it is only inches above the water for most of it's length. This a crocodile territory, so stick to the safety of the walkway. 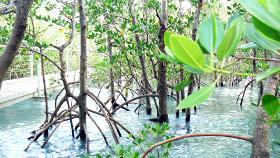 Just above the high tide

The walkway slopes gently down out from the shore, so a rising tide will cover the end section first, allowing visitors to return without getting cut off by water.

Information boards along the walk describe the flora and fauna of the area.

The Larrakiah people used the recourses of the mangroves in their traditional lifestyle and were known as 'the water people'.

High Tide covers the last section of the walkway.. 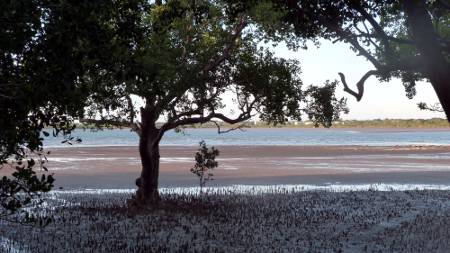 Mangroves and madflats viewed from the walkway at a low tide. 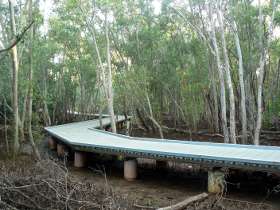 A similar walkway behind Casuarina beach