Darwin weather in January and February is dominated by tropical monsoons, bringing heavy rain, slightly cooler temperatures and some relief from the intensity of the build up.

This is the wet season- called Jiorrk by the local Jawoyn people - with continuous rain setting in for days at a time. 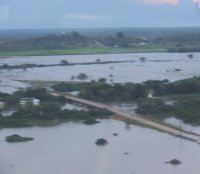 The rains bring relief from the hot humidity of November and December when much of the rain comes as local storms, often late at night.

The effect on the land is spectacular as the flood plains fill - even modern "flood-proof" highways can be cut by volumes of water.
Before new roads were build over the past twenty years or so, it was accepted that Darwin would often be completely cut off for road traffic. There was no rail link, so the only way in or out was by air. 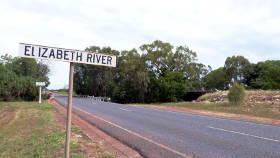 This is also cyclone season for the north of Australia and Darwin can be affected by cyclones that often form around the Top End.

Even if a cyclone misses Darwin, these storms can dump massive amounts of rain in a very short time and cause flooding anywhere down stream of the cyclone's path.

The new bridge over the Elizabeth River, built for duplicate lanes, has been raised several metres to minimize the chance of the Stuart Highway being completely cut at this crossing.

Many of the popular tourist destinations become inaccessible during this period and visitors should check the latest information before travelling.

Traditionally this has been the quietest time of the year for the tourist industry, however this has been changing a little in recent years.