Darwin weather in September and October can vary from week to week as patterns begin to change from the stable dry season to the hot and humid build up to the monsoons.

This is Worrwopmi in the Jawoyn clendar amd although it is not Spring as such, there are many plants which bloom at this time in readiness for the coming rains of the wet season. 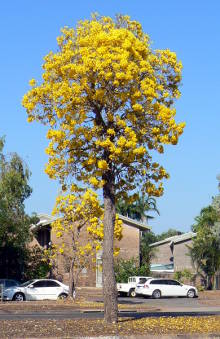 Sometimes the first couple of weeks of September can be very pleasant, an extension of low humidity dry season conditions. However with rising temperatures, as soon as the humidity begins to rise it can quickly change.

This is traditionally the time when the caravan parks empty out as the grey nomads that have come to Darwin to escape the cold southern winters begin their return journey south.

The first tentative rains settle the dust and the first green tinge appears on brown grasslands which have probably not felt rain for four or five months.

Darwin business was used to a marked slowdown over this period, however this will probably be less pronounced from now on, with an increased military and the Inpex gas project providing a more stable work force.

The weather statistics below are from 22 September 2012 and are typical of the readings you would expect for this period in Darwin.