Saratoga fishing is popular in the Northern Territory, although overshadowed by the barramundi. While saratoga are a good fighting sportfish, they are a catch and release fish considered unsuitable for the table.

Australia has two native species of saratoga, the northern saratoga (Scleropages jardini) are found across the top of Australia from the Gulf of Carpentaria to Western Australia and also in New Guinea. They are common in the same rivers and billabongs frequented by barramundi and are often caught by anglers who are really more interested in the barra.

Feeding close to the surface they can be taken with either lures or live bait and are renowned for their spectacular jumps as they try to throw the hook - which they often succeed in doing.

There is no bag limit on these fish in the NT as they are not edible anyway. However growing to around a metre, they can be an exciting catch, best released for another days sport.

If you aren't going fishing, the Wildlife Park at Berry Springs has lots of native fish in the Aquarium House. It's about a 45 minute drive down the highway from Darwin. 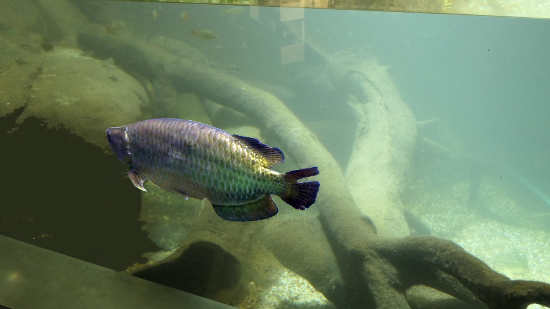 View native NT fish in air-conditioned comfort at the aquarium

This fish obviously has a problem with it's tail fin, but a comparison with the outline of the barramundi above clearly shows the differences between the two species.

Barramundi Fishing in the NT