The 1986 Cyclone Tracy movie or TV mini series is also available as a DVD with some 9 minutes of original ABC news footage of the morning after Cyclone Tracy visited Darwin in 1974.

There has been quite a bit of dramatic TV coverage of Hurricane Katrina in New Orleans, Cyclone Larry in Queensland and many other destructive storms over the past few years, but Cyclone Tracy is still remembered for the absolute and sudden destruction of Darwin in 1974.

We borrowed the DVD from the Casuarina library in late 2004 when all the talk was about the 30th anniversary of Tracy and how much Darwin has changed in that time.

Perhaps when watched in the intended format as a three part mini-series, the 3 hour plus drama would not seem to drag on as it follows the stories of several people in the days before the cyclone and through to their evacuation from the remains of Darwin afterwards.

Tracy Mann stars as Connie, a battling single mum, Chris Haywood is Steve, a man on his way to nowhere and Nicholas Hammond is a conman and drug runner. While the storyline is quite ordinary, it captures the isolation and frailty of life in the path of oncoming destruction.

Tracy hit Darwin in the dead of night and the film does manage to convey a sense of realism that makes you feel you probably do get a true sense of what that long night was like for the residents. The actual news footage blended in adds to the realism. 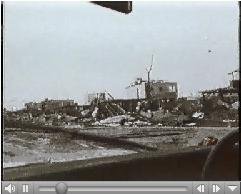 Read the stories of the survivors and their families here.