Darwin East Point Reserve is a rocky headland between Fannie Bay beach and the Nightcliff Headland, with a military museum and WW11 relics.

The area was heavily fortified during the war, with several large guns designed to protect Darwin Harbour.

The East Point Military Museum was originally housed in the WW2 concrete army command post. A new building  and a large collection of exhibits on 4 acres of tropical gardens puts this on the must visit list for Darwin.

This gun bunker was installed to defend Darwin Harbour from an asalt from the sea, which fortunately never eventuated.

The gun was sold to the Japanese after the war as scrap metal. 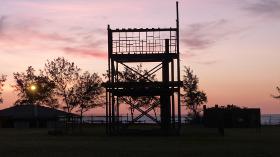 The reserve has never been developed and is a pleasant place to watch the sun set over the sea.

A resident population of wallabies comes out to graze as evening approaches.

For 40 years this group of enthusiasts have been holding competitions, night flying, novice events and family fun days. 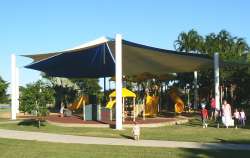 The entrance to the reserve is a popular picnic place, with a large children's playground.

Next to the playground is a man-made lake for swimming and the Fannie Bay beach, providing plenty of space for family recreation.

The Mangrove Walkway begins from the car park beside Lake Alexander and provides a way to gain a close look at Mangroves without churning through knee deep mud.