Darwins Doctors Gully is known for Aquascene Fish Feeding and as the Darwin Catalina Flying Boat base. It was the site of Chinese market gardens and the first fresh water supply.

Doctor's Gully with Naval base in background

At Aquascene milkfish, mullet, catfish, barramundi, rays and others feed on bread.

At high tide the water boils with hundreds of fish looking for a free feed, and the visitors are happy to oblige. This scene has become one of Darwin's best known tourist attractions and brings hundreds of people to the area at high tide when the fish come in.

Check the times before you go, as this is entirely controlled by tides. 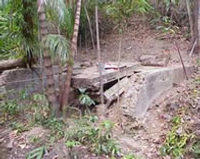 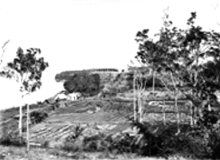 This is also the site of a heritage listed area known as Peel's Well, a well which was gazetted on 19 April 1877 and provided water for the first gardens in the settlement and visiting ships.

Most of the early gardeners were Chinese, with the first formal lease issued on 30 March 1875 to three Chinese settlers. 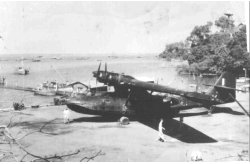 During Wold War 11 this was an important base for Catalina Flying Boats.
Some remains of wartime equipment can be still seen at low tide. 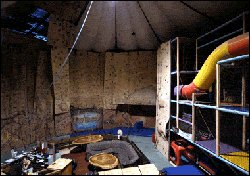 Only a short walk from the city, the gully can be accessed via staircase and path through dense rain forest leading down from behind the YWCA in Mitchell St.

Alternatively take the Tour Tub which calls in on it's round trips. Check tide times to arrive when the fish are feeding at high tide.